The wish for a medium sized speaker came to the project. The project uses a wide range of machines and skilles.

The body is first CNC, then cut angles on the table saw. The body also houses two acrylic spaces for letting light out. These are cut on the laser og then sandblasted to give a frosted finish.

The project is little about the sound and the circuit for it so a the membranes and the amplifier with Bluetooth was bought online.

The speaker system should run on Dewalt battery and have the possibility to run on one or up to four. The speaker also having a BMS and a battery level meter for each battery also including a charging system and being able to run with mains power and no battery\’s

inside is a Arduino mega mini. This is the brain of the speaker. It handels for example the input as play, pause, volume etc. and the controls the bought amp be emulating bottom presses.

The project also involves shift register to lower the number og wires and the GPIO\’s on the Arduino controller. On the pictures to the right, here can be seen tree RGB LED\’s controlled by two shift registers, thereby only needing three wire (not included power) instead of nine wires. 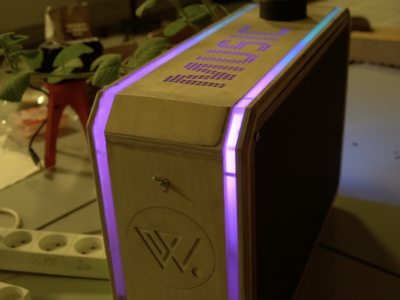