As part of Vermilion Racing and DTU I got the special course in \”Manufacturing of Advanced Fiber Composites\” here our job was to make the new front hood for the race of 2019.

Doing the course we learn about various fabrication ways, but composite moulding is often expensive and requires large negative moulds with special surfaces often costing more the 50.000 DKK even for smaller moulds.

As a student team with the only money from founds etc. money is a limited resource. We\’re therefore going to try a cheaper solution.

We decided to use a polystyrene mould for infusion moulding. A thing not tried at DTU before. Where was a bit of worse that the mould would collapse from the vacuum.

The mould is model in Fusion and then cut in two half\’s on a six axises robot arm CNC. Then glued together and smoothed with a sander.

The mould is then covered I plastic aka the slip membrane. This is for making sure the epoxy, used to do the infusion moulding, isn\’t sticking to the mould.

After running a few small scale testes, we figured do to the heat for curing the epoxy, the polystyrene collapses from the pressure and heat combo, but the project can be done with low heat and then giving is the needed curing heat after demoulding.

Our front is made from four layers of carbon twill with no core, it\’s flexible for fitting better over the main structure (which wasn\’t build at the time we build the mould).

The front hood was afterwards sanded and foiled as the surface isn\’t as good in the positive form as a negative mould. 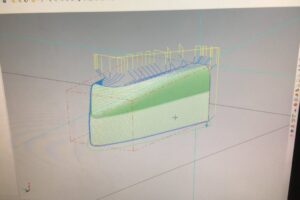